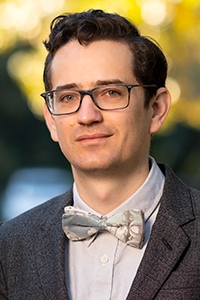 Alex (he/him/his) earned a B.A. in Media Production from Florida State University with a focus on athletics production, particularly with videography and video editing. While studying, he worked at various television studios, including WFSU-TV, the PBS affiliate in Tallahassee. It was at WFSU that Alex learned the positive role of public service, storytelling and community engagement. Upon graduation, he joined Notre Dame Mission Volunteers AmeriCorps in Apopka, Florida, where he served a communications role between two nonprofits, Hope CommUnity Center and Farmworker Association of Florida, with each serving immigrant populations and communities made poor from unjust socioeconomic situations. From there, he would serve as the Public Awareness Director for Prevent Child Abuse Louisiana and Director of Media and Communications at Hope CommUnity Center for a combined 5 years. During his free time during this period, he worked various sporting events as videographer, utility and audio for the ESPN family of networks, NBA and high school football. Alex joins CCPS after serving nearly 3 years as the Director of Communications for the College of Engineering at North Carolina A&T State University. He looks forward to leveraging his work in grassroots community-centric storytelling and academia to share the heart of the Center’s mission.