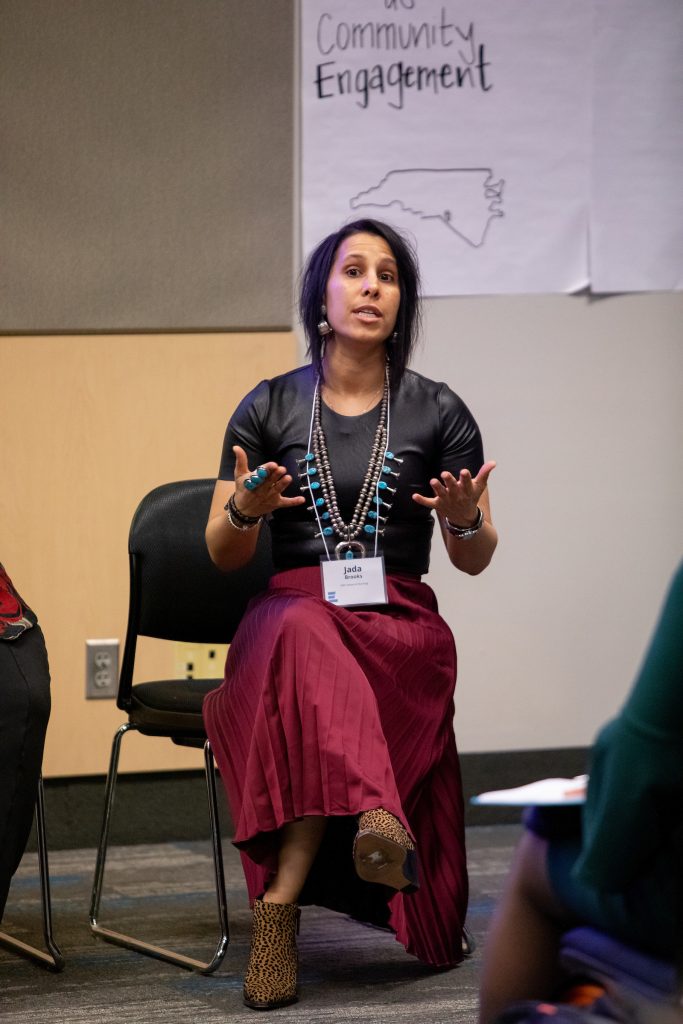 Dr. Jada Brooks embodies many roles. At first, they might seem disparate — but when you pause to look, the connections between them become clear.

As a member of the Lumbee Tribe of North Carolina, Brooks knows the importance of culture.

As a health professional, she knows the importance of cultural sensitivity in designing and implementing health interventions.

As a Thorp Faculty Engaged Scholar at Carolina, Brooks is committed to ethical community engagement — through her research on culturally-relevant interventions.

Brooks (Ph.D., M.P.S.H., R.N., F.A.A.N.) is an assistant professor at the UNC School of Nursing, where she studies environmental pollutant exposure and psychosocial factors involved in cardiovascular disease among American Indian women. Through this work, Brooks aims to promote health equity by providing data to inform low-cost and culturally-based interventions.

“All of my research has been aimed at understanding health disparities and trying to figure out what we can do to address them,” Brooks said in an interview with North Carolina Health News.

In late 2019, Brooks wrapped up the community-engaged project that she addressed when applying to become a Thorp Faculty Engaged Scholar in 2018. Titled Intertribal Talking Circle for the Prevention of Substance Abuse in Native Youth, the project used the “talking circle,” a traditional practice of American Indians, to prevent substance abuse among sixth-grade Lumbee Indian children in Robeson County, NC.

A talking circle is a group conversation format that American Indians have used for centuries.

Brooks considers the talking circle program successful because it concluded with the researchers training adults in the community to continue the effort on their own. When Brooks was helping manage the program, 70 adults participated: tribal leaders, staff of the local Boys & Girls Club, and teachers/administrators of the local school system.

“I want to see the community take ownership of the intervention,” Brooks said. She and her colleagues carefully designed the program to be culturally relevant and acceptable to the local community. It ended up being so popular that parents asked if the middle-school participants’ younger siblings could participate when they were old enough.

Brooks says that, when it comes to community-engaged research, best practices vary based on the researcher’s background and relationship with the community.

“Even though I consider myself an insider because I grew up here and am part of the Lumbee community, I still feel like an outsider in some ways,” she said. In every step of the project, Brooks and her team worked hard to ensure they had community buy-in before moving forward with ideas.

“Including key people who have an extensive network and connections with people in the community who can be influential is important,” Brooks said. “It’s all about relationships.”

That goes beyond knowing someone on a first-name basis, Brooks said. Respectful community engagement means approaching relationships with warm professionalism, such as by inviting community partners to be co-authors on a published paper and recognizing that the people you work with in a community are also members of your project team.

Brooks exemplifies those best practices in her work, and the Carolina Center for Public Service is grateful to partner with her through the Thorp Faculty Engaged Scholars program.

The Carolina Center for Public Service will recruit and select the next class of Thorp Faculty Engaged Scholars beginning in August 2020 for a program that will run from January 2021-December 2022. For more information, reach out to Margaret Barrett.