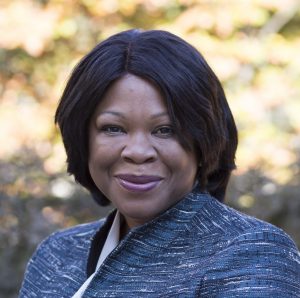 2021 Anita Brown-Graham’s history with UNC-Chapel Hill reveals a deep dedication to service through her varied roles as student, professor, alumnus and director. After graduating from the UNC School of Law in 1991, she spent three years working in private practice before making her return to the University at what was then the Institute of Government (now the School of Government). For 13 years, she worked tirelessly to serve the state’s public officials on a range of governmental liability and community and economic development issues, becoming a nationally recognized authority on developing strategies to lead communities out of economic distress. Notably, Brown-Graham became the first African American faculty member to be tenured at the School. She left Carolina in 2007 to serve as the director of the Institute for Emerging Issues at North Carolina State University, but she rejoined the School of Government in 2016 to launch the ncIMPACT Initiative. As director of the Initiative, Brown-Graham has spent the last five years leading the effort to expand the School’s capacity to work with public officials on complex policy issues. She works with her colleagues to devise programs to support communities across the state tackling issues including economic mobility, homelessness, workforce preparedness, the opioid crisis, expansion of education and more. Most recently, Brown-Graham was named to head Carolina Across 100, the Chancellor’s five-year initiative to engage with communities throughout the state to make a meaningful impact in the wake of COVID-19.

2020 – Carol Tresolini, recently retired vice provost for academic initiatives, received the 2020 Ned Brooks Award for Public Service. Known for encouraging collaboration, care and creativity during times of change, Tresolini was recognized for her legacy of connecting academic life with communities throughout North Carolina and beyond. During her years as vice provost, Tresolini worked to develop new programs and support and enhance existing programs, including the relocation of the American Indian Center into its own building and the establishment of the Carolina Latinx Center, the Partnerships in Aging Program, the Center for Faculty Excellence and the Carolina Asian American Center.

2019 – Della Pollock, professor in the Department of Communication, received the 2019 Ned Brooks Award for Public Service to honor her distinguished and sustained record of service to Carolina and the larger community. She has inspired students through innovative courses, mentorship and leadership. For more than a decade, her service-learning courses have connected students with community partners and often resulted in continued engagement long after the coursework is done. Pollock also serves as the founding Executive Director of the Marian Cheek Jackson Center, a nonprofit with the mission to honor, renew and build community in the historic Northside and Pine Knolls neighborhoods of Chapel Hill.

2018 – Dorothy Holland, Boshamer Professor of Anthropology Emeritus in the College of Arts and Sciences, received the 2018 Ned Brooks Award for Public Service recognizing her long commitment to building collaborations between the University and the community that create new opportunities and generate academic excellence. Holland co-founded the Center for Integrating Research and Action (CIRA) and the Graduate Certificate in Participatory Research (GCPR). CIRA took its social change research to grassroots organizations in the state, spurring new conversations about the best ways to advocate for issues. The GCPR creates opportunities for graduate students to develop research skills in partnership with communities and provides them with substantive collaborative research experiences. Holland also served as chair of the Anthropology Department from 1996 – 2001.

2017 – Lucy Lewis, recently retired assistant director of the Campus Y and director of the Bonner Leaders Program, received the 2017 Ned Brooks Award for Public Service honoring her commitment as a mentor for students engaged in public service and advocate for both students and community partners. Lewis was the founding director of the Bonner Leaders Program, which accepts work-study students with demonstrated leadership potential and a commitment to public service and provides them with opportunities to engage in intensive community work supplemented by weekly capacity-building workshops and critical issues seminars.

2016 – Beverly Foster, clinical associate professor and director of undergraduate education in the School of Nursing, received the 2016 Ned Brooks Award for Public Service for more than 30 years of providing and supporting public service within UNC and across North Carolina. Dr. Foster remains active in many local and state agencies related to health and human services, including the Orange County Board of Health, Healthy Carolinians in Orange County, the Healthy Carolinians Advisory Board and the Foundation for Nursing Excellence.

2015 – Mike Smith, dean of the School of Government (SOG), received the 2015 Ned Brooks Award for his 37 years of providing and supporting public service within UNC and across North Carolina. He engages with city and county officials across the state to share the SOG’s existing resources and learn how the School can better meet these public servants’ needs.

2014 – William Gentry, assistant director and executive programs director for the Community Preparedness and Disaster Management program in the Gillings School of Global Public Health, was recognized for his decades-long commitment to the advancement of disaster preparedness and his impact in the field of emergency management.

2013 – Stephen Caiola, associate professor in the Eshelman School of Pharmacy was recognized for more than four decades of promoting public service through his work with UNC Hospitals and at the School of Pharmacy. After establishing the clinical pharmacy program at UNC Hospitals, he worked with Orange Chatham Comprehensive Health Service to move UNC into the community to improve the healthcare needs of the underserved. He also involved pharmacy students as charter members of the Student Health Action Coalition (SHAC), the oldest health affairs student-run clinic in the country.

2012 – For the first time, the Ned Brooks Award was presented to two individuals, Shirley Ort and Fred Clark, because they were an integral team that worked together to increase opportunities and improve the lives of thousands of young people across North Carolina and throughout the nation. Ort was the director of the Office of Scholarships and Student Aid, and Clark was professor of Portuguese in the Department of Romance Languages and Literature. They received this honor for their work with the Carolina Covenant, a landmark program that provides debt-free education to youth from low-income families.

2011 – Alice Ammerman, professor in the School of Global Public Health and director of the UNC Center for Health Promotion and Disease Prevention, received the Ned Brooks Award for Public Service for lasting and collaborative relationships resulting in broad service to the community.

2010 – Eugene Sandler, professor emeritus, received the Ned Brooks award in recognition of his contributions during his 30-year career at the UNC School of Dentistry.