When I came to Carolina in January of 2003, I was immediately impressed with the spirit of public service that characterized our students and faculty. Soon I discovered a driving force behind this work: the Carolina Center for Public Service. I joined its advisory board and served until my retirement in early 2011. It was one of my best experiences at Carolina. 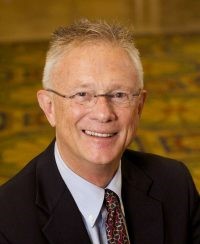 This excitement with the Center’s work has its roots in my own lifelong commitment to government, politics and public service. I became a political scientist and spent my entire career in state and federal government, higher education and nonprofit management.

More than ever, we need our most talented young people to devote themselves to public service and to improving the common good. I find this commitment in the extraordinary students that I have met through the Center. But few of them plan to run for public office, in part because of the divisive — even toxic — environment in political life.

However, the public sector has immense power to affect our future. The battlefield cannot be abandoned to the selfish, negative and short-sighted. We need more of our best young leaders to consider seeking public office. That is why I increased my giving to the Center to create internships for our undergraduates with elected public officials, providing exposure to the real day-to-day work, issues and impact of being in public office. We placed four interns with public officials the first year. The response from the interns and the officials and staff with whom they work has been overwhelming.

The Center cannot meet all of its existing needs or create other new opportunities for students without financial support, especially in light of declining state budgets. It’s more important than ever for those of us who support the Center’s mission to step up and help financially. In my opinion, nothing less than our future is at stake. I ask you to join with me in supporting the Carolina Center for Public Service and investing in our future.

Jesse White, Ph.D
Retired director of the Office of Economic and Business Development at UNC-Chapel Hill