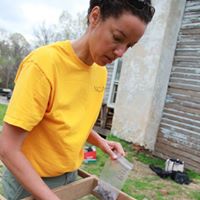 A past Thorp Faculty Engaged Scholar through the Carolina Center for Public Service and associate professor in the College of Arts & Sciences’ anthropology department, Anna Agbe-Davies works with community partners both in the Triangle and across the country to excavate history and share it with a broader audience.

Here she shares some of her most rewarding discoveries.

What does a historical archaeologist do?

We’re trying to understand the lives of individuals and societies in the modern period by looking at the things they left behind. It’s like a detective story. You’re putting together all these clues. It’s a lot like forensics in that sense. You look at all these bits of evidence, and you try to create a living picture out of them.

Why is archaeology an essential part of understanding history?

I think a big part of it is that if you’re trying to understand the past through the things that people write down, there’s this whole selection process. Some things might not be expressed candidly. People don’t censor the objects around them the way that they censor their language.

Can you tell us a little bit about your Pauli Murray Project? What did you discover at her home?
Pauli Murray was fundamentally a human rights activist who was engaged in the struggle against racism and sexism in the 20th century. She got her start in Durham, where she grew up, but she had a global impact. She was an attorney, an author, and a priest and a poet, among her accomplishments, and she helped craft the arguments that were the basis of Brown v. Board of Education.

One of the things that we discovered at her home was the efforts of her family to try to mitigate some of the environmental racism they were experiencing. The home is near a cemetery, which is higher up on the hill than the house, and all the water ran through the cemetery directly into their foundation. So, at that time she saw how structural racism works in a pretty concrete way. We got to understand how they responded to that by tracking the record of her grandfather’s complaints to the city, but we also uncovered drains and brick features they put in place themselves to divert the water. Seeing the material evidence of what they did physically to their space to cope was really a revelation.

The folks at the Pauli Murray Project brought me on board when they realized that the city’s efforts to finally fix the drainage problem, and the Project’s plans to restore the house, might damage archaeological evidence that could speak to Murray’s life there.

How does your current research build on that work?

I’m combining the study of the Pauli Murray house with a project I did previously on the Phyllis Wheatley Home for Girls in Chicago. They’re both places where African-American women were engaged in or prompted to do civic activism.

In the case of Pauli Murray’s home, she wrote an autobiography, so we have a lot of insight into her perspective on her own life, and she talks about how segregated Durham didn’t provide a lot of resources for black people. The neighborhoods they lived in were underserved and often in very bad shape, so she gives a lot of descriptions about what life was like in her neighborhood and in her home. So, there are interesting comparisons and contrasts. [The Phyllis Wheatley Home] was a residence as well as a place where people had job placement assistance and vocational training — a whole suite of services that they felt that women new to the city would need. Black women founded it to serve other black women. So, these are both interesting places to learn about their ideas about rights and to observe the physical evidence of the world they lived in and were trying to transform.

How does your work fit into the larger mission of the archaeology department at Carolina?

A lot of my colleagues work internationally or elsewhere in the U.S., and my work adds to that by giving us a sense of what North Carolina used to be, what we are now, and what we might be in the future.

Another point is that a lot of times there are barriers to students participating in archaeology, so there are a lot of good social justice reasons for giving people a chance to try archaeology in a place that is convenient to them. And selfishly I feel so much more connected and rooted to where I live because I’m also exploring it as a research topic. There’s so much to learn about this area.

There’s a saying that goes, “Dig where you stand.” The person credited with coining it is a historian, but it works really well for archaeology! There are amazing stories wherever you are, and archaeology is just one tool among many to make those stories more obvious and available to the rest of the world. I have this skill set that involves taking sites apart — reconstructing people’s experiences through the things that they leave behind — and if I can then tell those stories or present them in a form that’s accessible to a broader audience, it’s an awesome opportunity. I get lost in it.

As we celebrate Black History Month, what do you want people to know about the history you’ve uncovered as an archaeologist?

I think the thing that I’ve taken away is the incredible resilience and creativity of people. My original training was working in the colonial period, so I’ve done a lot of work on plantations, which means confronting slavery. It’s important to lay bare the structural forces that allow that kind of exploitation. It’s also fascinating to see how people’s lives unfolded in that context and their individual humanity. They’re not just cogs in this terrible wheel called racism, and when you excavate sites where they lived and worked and you spend day after day with the things that they used, that really hits home.