Before, during and after the 2020 presidential election, questions swirled online and among friends and colleagues. Why was the vote count taking longer than usual – or was it? What mechanisms were in place to prevent voter fraud? What legal issues were at play in the Trump administration’s post-election lawsuits? When is an election outcome really finalized?

In the days following the election, law and politics experts at UNC-Chapel Hill hosted a series of webinars to provide the Carolina community an opportunity to discuss answers to their questions about a contentious election that happened in the midst of a global pandemic.

Faculty members from UNC School of Law and UNC’s Department of Political Science addressed nonpartisan topics including election law, constitutional law, state and federal court systems, laws related to demonstrations/protests and more. Each of the sessions was unique, with topics determined by developing events and spontaneous audience questions. Between 66 and 135 individuals attended each session.

Eric Muller, Dan K. Moore Distinguished Professor of Law in Jurisprudence and Ethics at the School of Law, came up with the idea for the webinars.

“I assumed, before the election, that — based on everything we know about the President’s litigiousness — that there would be likely issues relating to election law,” he said. “I anticipated that the election might present a lot of legal questions (and) that people in the community might be interested in hearing from experts.”

Muller reached out to CCPS Director Lynn Blanchard, and the two worked together to establish other co-sponsors and recruit experts to join the panels, including professors Mike Gerhardt, Andy Hessick, Carissa Hessick, Bill Marshall, Kerrel Murray and Ted Shaw from Carolina Law, professors Jason Roberts and Sarah Treul Roberts from UNC’s Department of Political Science, and McGuireWoods associate Lawrence Cameron, a former federal prosecutor who graduated from UNC Law in 2010. 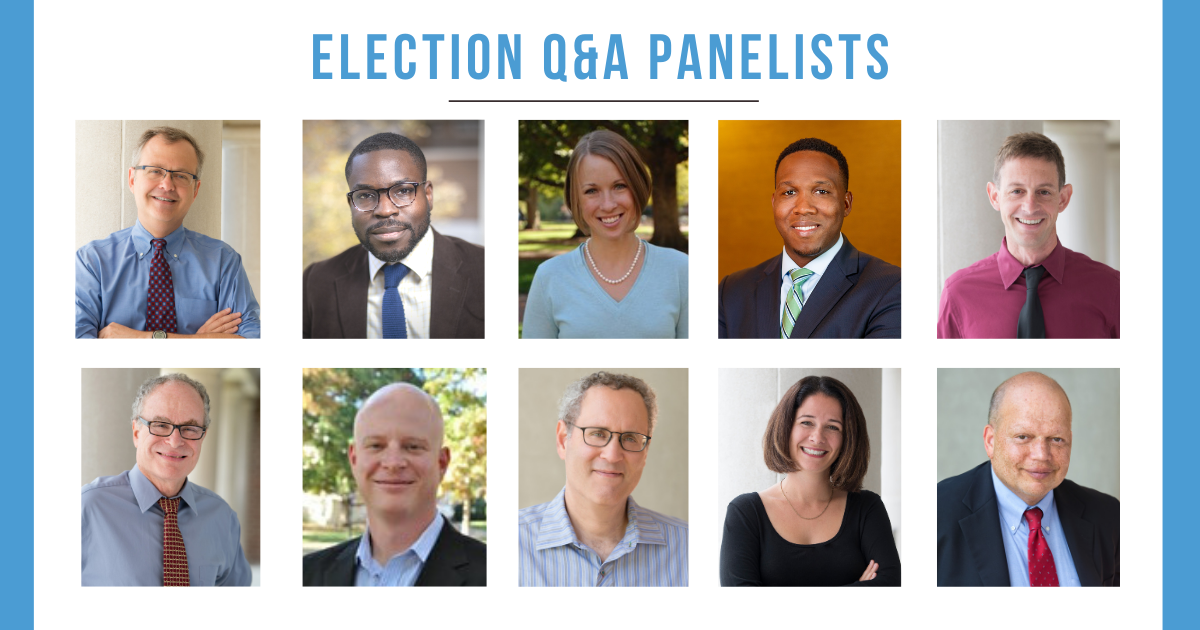 Blanchard expressed satisfaction with the turnout. “While we were not sure what the level of interest would be, we were pleased with the number of participants. The virtual format enabled an audience that included people who cannot participate in on-campus opportunities.”

Miriam and Tom Zietlow, parents of a UNC Law student, said they regularly attend University events to learn about a variety of subjects that interest them.

“This series of discussions was right up our alley,” the couple said in a joint statement. “The panelists for these sessions provided a distinct legal perspective vs. what is presented as political theater in the mainstream news.”

Sara Malone, an accountant in the UNC Department of Medicine, attended all five webinars.

“I very much enjoyed the format that allowed audience members to ask questions about the lawsuits filed by the Trump campaign and the ballot recounts that were held,” she said. “It was helpful to have UNC faculty experts give thoughtful and relatively clear answers to some rather complex questions and concerns as the post-election situation was evolving.”

She said the conversational format was especially meaningful during a time when most University employees are working remotely.

“So many faculty members were willing to take out time, night after night. Some faculty members would participate three or four times,” he said. “I don’t think it’s every law school in the country where faculty members with the depth of expertise that they had would be willing for free to give so much of their time to the community.”