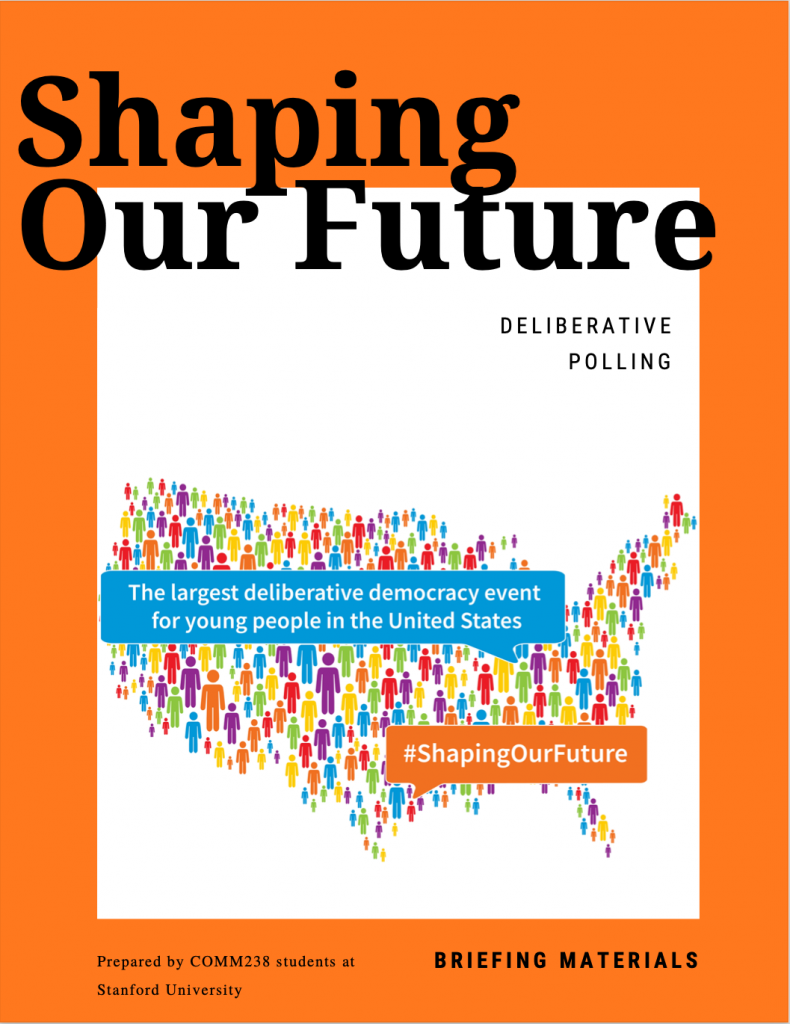 Carolina first-year Anvita Godavarthi had to weigh the value of spending a sunny spring weekend on a multi-hour video call — during final exam season.

Ultimately, she decided that the unique opportunity to participate in America’s democracy was worthwhile.

Along with 24 other UNC-Chapel Hill students recruited through the Carolina Center for Public Service, Godavarthi was one of 650 young people representing 34 colleges and universities at a two-day, online Deliberative Polling event in early May. Consisting of moderated discussions on some of the most pressing issues facing the nation, “Shaping Our Future” was the largest national deliberative event ever carried out among young people in the United States.

Deliberative Polling is a technique developed by Stanford University Professor James Fishkin as a way to deepen the public’s engagement with and understanding of public policy choices. Participants receive briefing materials in advance and complete a pre-survey on their initial views, then come together for small group deliberations and plenary sessions with balanced panels of experts before completing a post-survey to understand how their opinions changed.

“We received 45 pages of briefing material,” Godavarthi said after the event. “Based on that knowledge, we could share viewpoints on particular topics.”

The goal is not to reach consensus but to understand how a representative sample of a population would feel about various policy proposals if they had an opportunity to become informed about them. Research suggests that Deliberative Polling also impacts the participants: reducing partisanship, increasing understanding of alternative perspectives and deepening engagement in the political process.

About 60 percent of the 18- to 29-year-old participants were randomly selected from educational institutions representing more than 20 states, including community colleges, public and private universities, Hispanic Serving Institutions, and Historically Black Colleges and Universities. UNC-Chapel Hill participants comprised the largest student group of any college or university. The event also included young people who are not enrolled in—or have not completed—a postsecondary program.

“I thought it was great,” said Godavarthi, who is a pre-business major from Cary. “There were a lot of people from different age groups. Some people had a lot of experience and were much older than me, and some people who don’t go to college. We were put in smaller groups of 10-15 people for discussing each topic. It was really good to talk and connect with all of them, to hear and understand other perspectives.”

In a press release prior to the event, Dr. Fishkin noted the importance of inviting a nationally representative sample of young people: “Instead of limiting the dialogue to one class or campus, or relying on social media exchanges, this event will bring young people together from across the country, providing a unique opportunity for participants to hear perspectives across differences of politics, geography, socio-economic background, race and ethnicity, religion, and lived experience.”

Participants deliberated in small groups using a customized online platform developed by the Center for Deliberative Democracy at Stanford University. They also had opportunities to ask questions in plenary sessions with political leaders and issue area experts.

“Young people often feel shut out of the public policy conversation, even though these issues directly impact them now and in the future,” said Luke Terra, associate director at Stanford’s Haas Center for Public Service, in a press release prior to the event. The event was designed to provide insights into the policy preferences of young people, while also deepening participants’ skills in democratic deliberation across lines of difference.

Godavarthi felt that those goals were met.

“It was a good opportunity for me to learn, and hopefully for me to bring a small change by weighing in on policy proposals for issues the United States faces today.”

She now plans to volunteer more often and even get involved with programs like the Civil Union Climate Corps, which she learned about during the event.

The City College of New York

The University of North Carolina at Chapel Hill

The University of Texas at Austin

The University of the South