The Ned Brooks Award for Public Service honors the contributions and values of Ned Brooks, who has served the University since 1972, making significant contributions to the mission of service and engagement, including a leadership role in the development of the Carolina Center for Public Service. The award recognizes a staff or faculty member of the UNC-Chapel Hill community who throughout his/her career has, in a collaborative and sustained manner, made a difference in the larger community by:

The award is based on a sustained record of service over a period of years carried out through the individual’s role(s) at the University rather than as a private citizen. All faculty and staff are eligible. One award is given annually. The recipient will receive a $1,200 award and recognition at the annual Public Service Awards ceremony. Self-nominations and previous recipients of this award are not eligible. To view a list of past recipients, click the “Previous Award Recipients” button at the bottom of this page.

Nominations for the 2023 Ned Brooks Award will like open in November 2022 and be open through mid February 2023 in the CCPS Application and Nomination Portal. 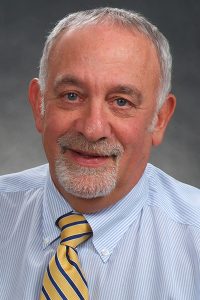 Strauss has served as the executive vice provost of UNC-Chapel Hill since 2008 and as Chief International Officer for over a decade. He holds joint appointments in three schools at Carolina and is a member of the UNC Craniofacial Center. He received the 2022 Ned Brooks Award for a distinguished and sustained record of service to Carolina and the larger community.

Strauss was instrumental to the establishment of the Thorp Community Engaged Scholars program, which has been a documented catalyst of increasing UNC faculty community engagement. As faculty course director, Strauss has consistently demonstrated personal investment in the program, the fellows and individual programs and community partnerships. He has been a role model for hundreds of UNC faculty who consider him their lifetime mentor in community engagement and service.

Strauss has positively influenced and inspired others to passionately serve. He has achieved all this while tirelessly serving the university in major campus-level administrative roles and continuing to care for young children with craniofacial anomalies weekly in the Adams School of Dentistry Craniofacial clinic. He has also led the UNC Center for AIDS Research Community Advisory Board for decades, and his AIDS course is a testament to his commitment to the HIV community.

One nominator, who was a member of the second class of scholars stated: “Ron’s approach to teaching and connecting made a lasting impression on me as a junior faculty member striving to develop a career that had public service as a cornerstone.”

The nominator continued “as Executive Vice Provost, Ron connects all of the academic deans with the Provost’s office. He approaches this role with the same focus on compassion, mentorship, patience, and service. In both of these settings, Ron demonstrated a type of leadership that is rare. It is grounded in humility and connection. It draws on strengths of others and builds relationships. It relies on trust and openness. It is leadership that looks beyond the leader and the follower to the community that we are all trying to serve and support.”

Ron’s decades-long service at UNC he has positively influenced and inspired others to passionately serve. He has achieved all this while tirelessly serving the university in major campus-level administrative roles and continuing to care for young children with craniofacial anomalies weekly in the Adams School of Dentistry Craniofacial clinic. He has also led the UNC Center for AIDS Research Community Advisory Board for decades now, and his popular AIDS course is a testament to his commitment to the HIV community and to teaching.

Another nominator wrote, “Dr. Strauss is most deserving of this lifetime achievement award. Dr. Strauss has been a pillar at Carolina during times of tremendous transition. He is an incredible leader, mentor, servant and friend.”